After I broke my Ti frame in January, I decided that I should get a backup road bike. Anyone who's broken 2 titanium frames in around 12 years should probably have more than 1 road bike. Or at least, anyone who was completely unhappy about having to ride his mountain bike around for 2 months should have a backup.

I settled on the Rivendell Roadini. Other bicycles that were considered were either a Rock Lobster custom steel frame (and fork), or a R&E cycles Rainier. Both would have cost more, and while a A Homer Hilsen was available in May, I finally decided against that as well, not because of the cost, but because it used 135mm spacing and I only had 130mm wheels.  The Roadini had downtube shifters and I decided that I might as well take advantage of them.  I've had a long history of liking the way Grant Peterson's designs ride, and even though prices went up to $1300, considering the bike came with a headset, fork, and seatpost, I was happy to return to the Rivendell fold, after I'd sold my Heron Touring bike way back in 2008.

While waiting for the Roadinis to arrive, I built up or scavenged the parts:

When the frames arrived, I had a call with Will from Rivendell, and after realizing that I was going to put a drop bar on the bike he decided that the 54cm would work better for me than the 57cm frame. I didn't object --- a look at the geometry diagrams indicated that the 54cm was indeed a better match for my Strong ti frame than the 57cm would be. I would have a lot of seat post showing, but it looked normal to my 1990s-trained eyes. 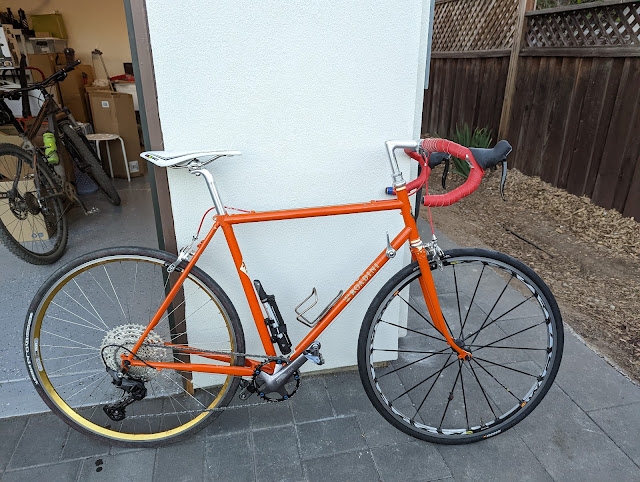 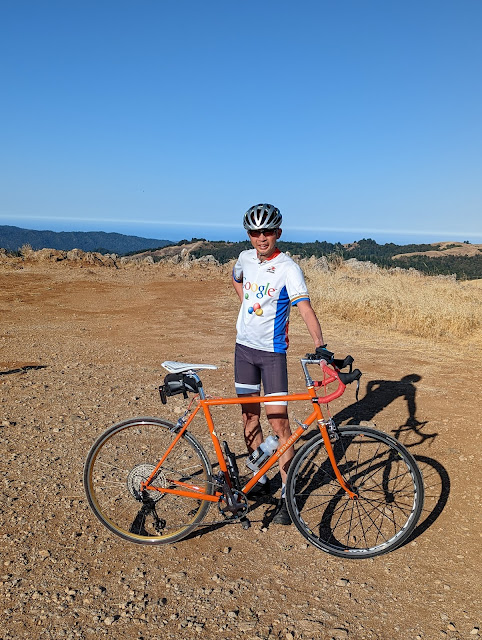 Over time, as I rode the bike more, I got to appreciate the plush quality of the ride as well as the way it handles. Frequently riding the bike feels like riding on a leaf spring --- the bike removes chatter from rough roads and unpaved roads --- I set PRs coming down Fremont Older. I can definitely see myself riding the Stevens Canyon MTB track with a set of 700x38mm knobbies.
Needless to say, buying the Roadini was a good decision. It's given me sufficient data about how to get similar handling and correct some of the deficiencies of past designs, while giving me insight as to what I really like about bike geometry. After a week of riding I discovered a chip in the paint on the head tube which I didn't know how it got there. It's another reminder that I'm just not kind to bicycles and all sorts of damage appears that I don't know about. I want the frame to be lighter, not need paint, and I would like the BB drop to be lower, especially for using big tires. The chainstay could stand to be about 1cm shorter. But I'm not sure I'd change anything else about the bike!
I frequently have to remind myself that I'm very spoiled. I've ridden/test ridden many bicycles, but had the luck to ride a Grant Petersen designed bike early on, and have essentially been riding a variant of one of his bikes for much of my adult life. If you've never ridden a Grant Petersen design you owe it to yourself to ride one. He's a legend for good reason. The Rivendell Roadini is sure to be sold out completely by the time you read this, but it's worth the wait!
Piaw Na at 7:00 AM
Share

I actively moderate the blog for spam.